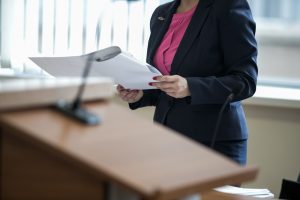 An hourly fuel tech and driver brought an action under the FLSA.  The arbitrator concluded that the agreement allowed for a collective action, and the U.S. Fifth Circuit affirmed the District Court’s rejection of the defendant’s motion to vacate that determination:

In this case, “the arbitrator pointed to the breadth of claims subject to arbitration – with few exceptions not applicable here, ‘any claim that could be asserted in court or before an administrative agency’ and ‘any controversy or claim’ arising out of the employment relationship fell within the agreement’s ambit. Likewise, the arbitrator noted that the agreement authorized arbitration of ‘all remedies which might be available in court.’ Finally, the arbitrator noted that the parties agreed that the American Arbitration Association (AAA) rules for employment disputes would govern arbitration. And those rules permit class proceedings.”

Finally, the Court took the opportunity to address the defendant’s demand for oral argument: “Sun Coast’s motion misunderstands the federal appellate process in more ways than one. To begin, the motion claims that ‘oral argument is the norm rather than the exception.’ Not true. More than 80 percent of federal appeals are decided solely on the basis of written briefs. Less than a quarter of all appeals are decided following oral argument. In addition, Sun Coast suggests that deciding this case without oral argument would be ‘akin to … cafeteria justice.’  In this appeal, the panel unanimously agreed that the decisional process would not be meaningfully aided by oral argument. That should surprise no one, considering the one-sided language of the agreement, Sun Coast’s failure to preserve its argument before either the arbitrator or the district court, and its confusion on appeal between Opalinski I and Opalinski II. Arbitration has sometimes been criticized for favoring ‘powerful economic interests’ over those the interests harm. But another tactic powerful economic interests sometimes use against the less resourced is to increase litigation costs in an attempt to bully the opposing party into submission by war of attrition – for example, by filing a meritless appeal of an arbitration award won by the economically weaker party, and then maximizing the expense of litigating that appeal. Dispensing with oral argument where the panel unanimously agrees it is unnecessary, and where the case for affirmance is so clear, is not cafeteria justice – it is simply justice.”