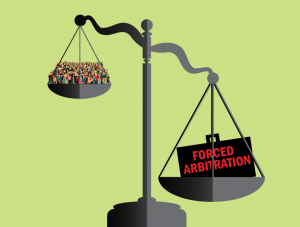 In a commercial dispute between two companies, one company sought to dismiss the case and compel arbitration, while the other claimed that there was an exception to the contractual provision calling for arbitration where one party was seeking injunctive relief.  Concluding that the contract in question required the Court to rule on the motion for preliminary injunction, while referring everything else to the arbitrators, Judge Young took the occasion to explore some MYTHS AND REALITIES CONCERNING COURTS AND ARBITRATION:

First, the Court believed it was important to note that this was not “forced arbitration” – “that one-sided species of arbitration unconscionably forced on vulnerable consumers and workers and almost universally reviled, enforceable only due to the mandate of a slim majority of the Supreme Court.”  But rather “the product of mutual negotiation among independent equals, each represented by skilled counsel … precisely the knowing mutual resort to arbitration to which the Federal Arbitration Act applies.”

Then, as to the Myths and Realities:

“It appears that in this ‘big law’ era, the drafters operated under the myth that arbitration is cheaper, faster, and more confidential than litigation (only one of these is true) without talking to trial lawyers who understand the reality that while people may not want trials, what they do want is a firm and reasonably prompt trial date before an impartial fact-finder as the best chance for a fairly negotiated settlement. Consider:

“Faster? On this factor, the federal courts in Massachusetts win hands down. Again, the trial lawyers know it. When CellInfo sought to pick up the pace, it called for a preliminary injunction and brought the Court into action as a player. When the Court’s contemplated pace outstripped the lawyers’ ability to keep up, they jointly negotiated a slowdown. Indeed, had the parties genuinely wanted court adjudication they could have agreed to it, and this case would have been resolved before arbitration could get off the ground. This is not an isolated phenomenon. It is applicable to all types of federal civil litigation.

“Confidentiality? Here, arbitration comes into its own. While this Court will assiduously protect the parties’ trade secrets, now that the parties are headed for settlement or arbitration their affairs will disappear entirely from public view. Secret, private tribunals carry with them a host of other societal ills, but on these policy issues the Congressional mandate in the Federal Arbitration Act is crystal clear — corporate secrecy is preferable to public transparency. Doubtless CellInfo and America Tower have many business reasons for wishing to shield their inter-corporate squabble from the eyes of competitors and present and potential clients.

“What may be most troubling about secret proceedings is the lack of any oversight of the process itself. Who is to know if the arbitrators themselves commit improprieties, or counsel are lax, make missteps, or are frankly incompetent? Instead, corporations console themselves when paying their legal bills with the myths that they have chosen a cheaper and faster means of dispute resolution — although neither is true.

“Which is the better approach to adjudication? I am not so self-regarding (or confident) to stake a claim. The honest answer – it depends. As regards this case, the facts are these:

“The litigation costs will be roughly equivalent, though the start-up costs of arbitration are greater. So long as one party wants speed, the Massachusetts federal courts are markedly faster, 5-8 months start to finish. In arbitration, CellInfo and American Tower can cloak themselves in secrecy; in federal court they cannot. At the conclusion of arbitration, the parties will receive an award but no explanation and will have virtually no appellate rights. At the end of a federal trial the parties will get a thorough written decision and award. Each will have full rights to appeal to one of the finest appellate courts in America.

“Which course is better? You be the judge.”