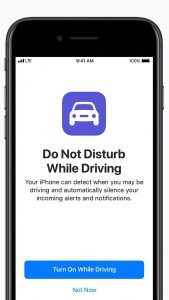 Ashley Kubiak was driving her pick-up truck on April 30, 2013 when she received a text message on her iPhone 5. She looked down to read the text, and then turned her attention back to the road, too late to avoid colliding with a vehicle carrying two adults, who died, and a child, who was rendered paraplegic.

In 2008, Apple had secured a patent covering “lock-out mechanisms for driver handheld computing devices.” The patent included the following: “Texting while driving has become a major concern of parents, law enforcement, and the general public. An April 2006 study found that 80 percent of auto accidents are caused by distractions such as applying makeup, eating, and text messaging on handheld computing devices (texting). According to the Liberty Mutual Research Institute for Safety and Students Against Destruct[ive] Decisions, teens report that texting is their number one distraction while driving. Teens understand that texting while driving is dangerous, but this is often not enough motivation to end the practice.  New laws are being written to make texting illegal while driving. However, law enforcement officials report that their ability to catch offenders is limited because the texting device can be used out of sight (e.g., on the driver’s lap), thus making texting while driving even more dangerous. Texting while driving has become so widespread it is doubtful that law enforcement will have any significant effect on stopping the practice.”  Apple, however, did not implement any version of its “lock-out mechanism” on the iPhone 5, which Kubiak was using at the time of the accident.

Representatives of the victims of Kubiak’s accident sued Apple under Texas law, alleging that the accident was caused by Apple’s failure to implement the patent on the iPhone 5 and to warn iPhone 5 users about the risks of distracted driving.  Plaintiffs alleged, among other things, that receipt of a text message triggers in the recipient “an unconscious and automatic, neurobiological compulsion to engage in texting behavior,” citing various studies and reports, including a proposed expert report.

The district court dismissed the complaint at the Rule 12 stage, and the U.S. Fifth Circuit affirmed.

Focusing on the element of proximate cause, the Court noted that Appellants concentrated on issues of concurrent and superseding causation, arguing that Apple’s device and Kubiak’s negligence were concurrent causes of the accident.  But, the Court noted, these concepts arise only when more than one legally recognized cause is present, and, therefore, “We must first determine whether Texas law would recognize a smartphone’s effect on its user as a cause at all.

“No Texas case has addressed whether a smartphone manufacturer should be liable for a user’s torts because the neurobiological response induced by the phone is a substantial factor in her tortious acts. To our knowledge, no court in the country has yet held that, and numerous courts have declined to do so. As such, no authority indicates to us that Texas courts, contemplating reasonable persons and ordinary minds, would recognize a person’s induced responses to her phone as a substantial factor in her tortious acts and therefore hold the phone’s manufacturer responsible.”