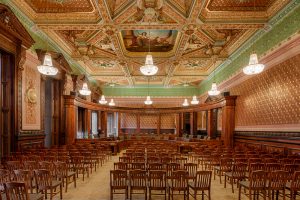 After the plaintiff Foundation was sued in connection with alleged securities violations and coverage under its liability policies was denied, the Foundation sued its broker for negligently failing to procure coverage that would have provided defense and indemnity to the Foundation.  The broker sought to discover communications between the Foundation and its counsel in the securities fraud cases under a so-called “common-interest” exception in favor of insurance companies with respect to their insureds.  The Illinois Supreme Court, however, declined to extend the exception.

In Waste Management, 144 Ill.2d 178, 161 Ill.Dec. 774, 579 N.E.2d 322, both the insureds and insurers filed declaratory judgment actions seeking a determination of their respective rights and liabilities under the applicable insurance policies relative to the insurers’ right to defend and duty to indemnify the insureds in personal injury and property damage lawsuits stemming from the insureds’ operation of hazardous waste disposal sites. The insurers denied coverage for the tort suits and, in the declaratory judgment action, sought production in discovery of the files of the insureds’ defense counsel that dealt with the underlying tort litigation. The insureds claimed attorney-client and work-product privileges, but the Illinois Supreme Court held that the files pertaining to the underlying litigation were discoverable.  First, the cooperation clause in the parties’ agreement required the parties to cooperate and imposed a duty on the insureds to assist in the conduct of litigation. “When an attorney acts for two different parties who each have a common interest, communications by either party to the attorney are not necessarily privileged in the subsequent controversy between the two parties.”  Secondly, the Court found a general exception in the case of insureds.  Although in the typical case where the common-interest doctrine is applied the attorney has provided joint or simultaneous representation to both parties, “the doctrine may properly be applied where the attorney, though neither retained by nor in direct communication with the insurer, acts for the mutual benefit of both the insured and insurer. It is the commonality of interests which creates the exception, not the conduct of the litigation.”

In this case, however: The privity of contract is fundamentally different. “The insured-insurer relationship in Waste Management brought into play public policy considerations (which are absent here) that required full disclosure by an insured to his insurer. Here, the contract between the Foundations and Gallagher simply required Gallagher to indemnify the Foundations for Gallagher’s own negligence, a duty the law would arguably impose upon any tortfeasor for its own negligence regardless of contractual obligations. This is much different, we believe, than the situation in cases like Waste Management where the insurer has a duty to indemnify its insured for the insured’s negligence, not the insurance company’s own negligence.  To apply the doctrine here would be at odds with the purpose of the attorney-client privilege to promote full and frank consultation between a client and legal advisor without fear of compelled disclosure. It seems to us that Gallagher’s and the Foundations’ interests were always adverse, and there was not a commonality of interest in the same way that is the case when an insurer has a duty to indemnify and defend from the beginning. Here Gallagher had no such duty or right to defend and had no duty to indemnify for any negligence on the part of the Foundations; in fact, Gallagher disclaims all such duties and is being sued for its own malpractice, which arguably could be established quite apart from any duty to indemnify undertaken contractually by Gallagher. Under the circumstances, the Foundations never had any reason whatsoever to think that their attorneys would share any confidences with Gallagher. Moreover, unlike in Waste Management, we cannot see how the communication by the Foundations with their defense counsel is of a kind reasonably calculated to protect or further any kind of common interest between the parties in this case in defeating or settling the claims against the Foundations in the underlying LBO Litigation.”