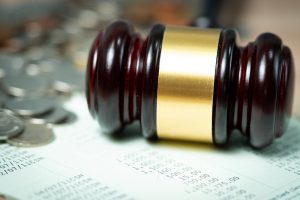 Pamela Maslowski was injured in a car accident and retained the law firm of Schwebel Goetz & Sieben to commence a personal-injury action on her behalf. Two years later, Maslowski entered into a litigation-funding agreement with Prospect Funding Partners. Under the terms of the agreement, Maslowski sold to Prospect an interest in her personal-injury action for $6,000. In the event Maslowski recovers damages, Prospect is entitled to receive $6,000, a $1,425 processing fee, and 60% annual interest based on a set schedule, for a total “repurchase” amount not to exceed $25,245.  After settling her personal injury action, Maslowski brought this action in Minnesota seeking a declaration that the agreement is invalid because it is champertous and unconscionable.  Prospect, at the same time, filed a breach of contract case against Maslowski in New York.  Both the Minnesota court and the New York court rejected application of the New York forum-selection clause, and the New York lawsuit was dismissed.  In Minnesota, the trial court refused to apply the New York choice-of-law provision in the litigation-funding agreement, concluding that it was drafted to evade Minnesota law, and determined that the entire agreement was void and unenforceable.  The Court of Appeal affirmed.

“Minnesota law prohibits champerty and maintenance for public policy reasons. These prohibitions are designed to prevent officious intermeddlers from stirring up strife and contention by vexatious or speculative litigation which would disturb the peace of society, lead to corrupt practices, and pervert the remedial process of the law.”

In this particular case, Prospect was not a party to Maslowski’s personal-injury action. “The agreement speculates on Maslowski’s potential recovery by effectively selling $6,000 to her in exchange for her payment of a $1,425 administrative fee and a 60% annual interest rate on the ‘repurchase’ of the $6,000, with Maslowski owing nothing if she does not recover in the underlying action. And the agreement requires Maslowski to relinquish control over certain aspects of her action, such as requiring Prospect to be notified if she retains a different attorney and requiring her attorney to sign an ‘Acknowledgement’ and ‘Letter of Direction’ as to how Prospect should be paid.  The key circumstances of this case – a contingent recovery, exorbitant interest rate, and a contrived interest in the underlying litigation – are the same as those Minnesota’s appellate courts have deemed to violate the law against champerty and maintenance.”

The Supreme Court of Minnesota, however, reversed:

“Champerty is a common law doctrine, and the development of the common law is determined by the social needs of the community which it governs. We have previously explained that, as society changes, the common law must also evolve with it.  Our review of changes in the legal profession and in society convinces us that the ancient prohibition against champerty is no longer necessary.

“We first recognized the prohibition against champerty in the years before we adopted formal rules of ethics and before we adopted Minnesota’s Rules of Civil Procedure. Today, the rules of professional responsibility and civil procedure address the abuses of the legal process that necessitated the common-law prohibition. Although attorneys may advertise to the general public, there are strict limits on solicitation. See Minn. R. Prof. Conduct 7.2 (generally permitting, but regulating, attorney advertisements); Minn. R. Prof. Conduct 7.3 (limiting solicitation of clients).  Attorneys who file frivolous claims or use the legal system for harassment are subject to discipline and sanctions. See Minn. R. Prof. Conduct 3.1 (prohibiting lawyers from asserting frivolous claims); Minn. R. Civ. P. 11.02 (requiring attorneys who submit pleadings, motions, or other documents to the court to certify that they present the materials for a proper and nonfrivolous purpose); Minn. R. Civ. P. 11.03 (providing sanctions for attorneys, law firms, and parties who violate Rule 11.02).

“Along with the increase in regulation, another important development in the law has been the narrowing or abolition of other common law prohibitions based on concerns about champerty and maintenance. Although contingency fees were disfavored under early common law, all American jurisdictions now allow attorneys to take cases on contingency. Today, we understand contingent fee agreements as a way to facilitate access to justice by incentivizing attorneys to take cases that they might otherwise decline because the client cannot afford their services on an hourly or fixed-fee basis.

“Similarly, attitudes have shifted concerning the assignment of choses in action. See Leuthold v. Redwood County, 206 Minn. 199, 288 N.W. 165, 167 (1939) (“The law of this state is that an assignment of a chose in action is valid and complete in itself upon the mutual assent of the assignor and assignee without notice to the debtor”); Anthony J. Sebok, The Inauthentic Claim, 64 Vand. L. Rev. 61, 72–74 (2011) (explaining that fears of champerty and maintenance underlie the traditional common law rule of non-assignability of claims, but the rule has generally been abandoned across the United States in favor of a more modern approach).

“Societal attitudes regarding litigation have also changed significantly. Many now see a claim as a potentially valuable asset, rather than viewing litigation as an evil to be avoided. The size of the market for litigation financing reflects this attitudinal change. See Investing in Legal Futures: The Rise of the Litigation Finance Firm, The Practice (Sept/Oct 2019) (citing an estimate of the litigation finance market’s value at $50 to $100 billion).  Businesses often seek financing to mitigate the risks associated with litigation and maintain cash flow for their operations. Victoria A. Shannon, Harmonizing Third-Party Litigation Funding Regulation, 36 Cardozo L. Rev. 861, 869 (2015). It is also possible that litigation financing, like the contingency fee, may increase access to justice for both individuals and organizations. Maya Steinitz, Follow the Money? A Proposed Approach for Disclosure of Litigation Finance Agreements, 53 U.C. Davis L. Rev. 1073, 1085 (2019).

“It is true that the rules of professional responsibility and civil procedure do not specifically regulate champertous agreements. But, as we have explained, the rules of professional responsibility and civil procedure prevent both attorneys and parties from profiting off of frivolous litigation — which is the type of behavior that we took issue with in Huber, Holland, and Gammons. It is also unlikely that companies like Prospect will fund frivolous claims because they only profit from their investment if a plaintiff receives a settlement that exceeds the amount of the advance — an unlikely result in a meritless suit.  Litigation financing companies have claim valuation procedures to avoid this very problem.

“We are likewise unpersuaded by Maslowski’s argument that concern for tort victims requires us to maintain an ancient prohibition. Although it is important that the victims of torts receive compensation for their injuries, they nonetheless have the freedom to contract, and we must not lightly disregard that basic principle. Maslowski’s argument ignores the many sophisticated parties to whom this reasoning does not apply, such as those who seek commercial litigation financing and understand the risks involved with such agreements.

“Regarding Maslowski’s argument that litigation financing under-incentivizes settlement, she cites no empirical evidence to support her claim. There is also a well-reasoned argument to the contrary made by scholars considering the same issue. See, e.g., Ronen Avraham & Abraham Wickelgren, Third-Party Litigation Funding—A Signaling Model, 63 DePaul L. Rev. 233, 235 (2014) (explaining that the decision to fund a plaintiff may create a ‘credible signal’ that the plaintiff’s case has merit, which can affect a defendant’s incentives to settle). And, as Prospect points out, contingent fee agreements arguably affect a plaintiff’s calculation regarding settlement in a similar manner because they reduce the plaintiff’s ultimate recovery. Yet we permit such arrangements because they allow plaintiffs who would otherwise be priced out of the justice system to assert their rights. We believe the same is true of litigation financing, as explained above.

“Finally, we note that district courts may still scrutinize litigation financing agreements to determine whether equity allows their enforcement.  Parties like Maslowski retain the common law defense of unconscionability.  Courts should carefully review uncounseled agreements, particularly between parties of unequal bargaining power or agreements involving an unsophisticated party.  Courts and attorneys should likewise be careful to ensure that litigation financiers do not attempt to control the course of the underlying litigation, similar to the ‘intermeddling’ that we described in our early champerty precedent. There is also the possibility of further regulation by the Legislature, although this prospect is an issue beyond the scope of our review.”