An attorney who represented a client in an intellectual property matter adverse to the client’s former employer sought guidance from the N.Y. State Bar Ethics Committee based on the following: 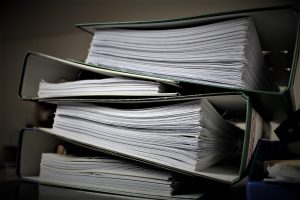 “These qualifications require a fact-intensive inquiry balancing factors favoring a lawyer’s interest in maintaining a copy of a client file and factors favoring a client’s interest in destruction of that copy.  This balance determines the extent to which the lawyer may condition compliance with a client’s demand for destruction of a file on protections for the lawyer’s benefit.  No exhaustive catalog of these factors is practicable, but certain common considerations are likely to recur, among them the strength of the client’s claim to ownership; the sensitivity of the documents; the centrality of their sensitivity to the object of the representation; the legitimacy of the client’s request for destruction; the extent to which the documents slated for destruction comprise the client file (i.e., one document versus the entire file); the difficulty associated with destruction of the documents; the degree to which the lawyer is subject to a meaningful risk of later liability; and the availability and feasibility of provisions protective of the lawyer’s interests.”

“Applying these considerations to the current inquiry, we believe that it would be reasonable for the lawyer to request a release and a simple hold-harmless agreement from the lawyer’s former client in exchange for the lawyer’s agreement to destroy the documents at issue.  Because the documents originated with the client (no matter their original provenance), the client’s claim to ownership is strong.  The nature of the dispute – that the documents embody proprietary information – reflects their sensitivity, which appears to be core to the nature of the lawyer’s initial engagement, and the settlement agreement supplies a legitimate basis for the client’s request.”

In conclusion: “Compliance with the terms of a settlement reached by a former client provides a legitimate reason to comply with that former client’s request to destroy client-owned documents in a lawyer’s possession.  The lawyer may condition deletion of the file on obtaining a release and a simple hold-harmless clause from the former client, and may maintain an inventory of the file names, sizes, and dates for data supplied by the former client to the lawyer during the representation and maintained in the lawyer’s files.”