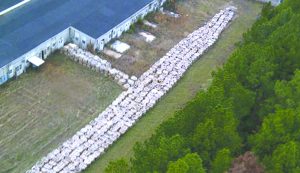 Following an explosion near Minden, the investigation revealed the improper storage of munitions, and a voluntary evacuation order was issued. The district court certified a class of property owners and/or residents in the area who were affected by the explosion and/or the evacuation order, and, on defendant’s motion to modify the class definition, made it clear that the evacuation class members in the 71023 zip code must show that they actually resided at their dwellings at the time of the evacuation, and that the explosion class would include those within a nine-mile radius of the explosion described by latitude and longitude, if that information could be obtained.

First, the Court of Appeal found, on numerosity grounds, that “the plaintiffs failed to show that there is a large number of people claiming damages as a result of the 2012 explosion and voluntary evacuation who were potential members of this class action.”

Then, on commonality grounds, the Court of Appeal found that: “Causation must be the same for all class members with the same set of operative facts and law. The record here shows that the plaintiffs have failed to establish that there are questions of law and fact common to the class. The plaintiffs are seeking damages for two separate, distinct, and unrelated events. The explosion occurred in October 2012 and allegedly resulted in property damage. The voluntary evacuation occurred several weeks later, in November and December 2012, not as a result of the explosion, but as the result of the discovery of improperly stored explosives at the Explo facility. Those allegedly suffering property damage from the explosion have an entirely different source of causation than those claiming damages from the voluntary evacuation. There is no common cause or disaster between these two disparate groups of potential class action members and there is no common nucleus of operative facts.”

Typicality was found to be lacking on similar grounds.

Then, the Court of Appeals found no adequacy of representation based on the competing interests’ of class members for a limited amount of available insurance proceeds.

With respect to the objectively ascertainable class definition requirement, the Court of Appeal held that “no one class may be defined objectively because the claimed damages arose from two entirely separate events. The attempts by the trial court to define a single class in this case demonstrate the difficulty of that task. The trial court set forth different and distinct class criteria for those who allegedly suffered property damage from the explosion and those who allegedly incurred damages from the voluntary evacuation. Because the plaintiffs have different causes for their damages, they are not a single class.”

Finally, the trial court did not discuss in its opinion the requirements of predominance and superiority under Article 591(B). “However, because the trial court was manifestly erroneous in determining that the plaintiffs satisfied the commonality prerequisite of La. C.C.P. art. 591(A), we must logically conclude that substantial questions of law and fact common to the class will not predominate over questions affecting only individual members. As with the commonality determination, and for the same reasons, we find that the predominance requirement has not been satisfied in this case.”